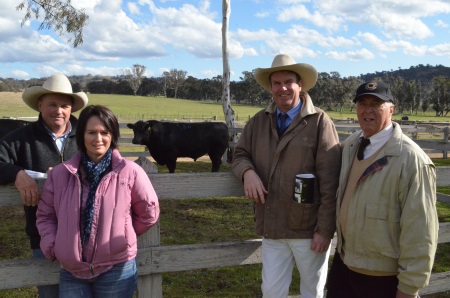 Sired by Millah Murrah Right Time F226 and out of a GW Lucky Charm female, the two-year old bull weighed 840 kilograms, had an average daily gain of 1.09kg, and exceeded the previous Australian record for a SimAngus at auction by $2000.

Sired by TNT Tanker U263 and out of a Langton-Gate Lucky Ace daughter, the two-year old weighed 860 kilograms with an average daily gain of 1.10kg.

Volume buyer on the day was Richard Creighton, Gordonbrook Station, Grafton, who secured six Black Simmental bulls to top at $8000 twice and average $6167.

Their second year buying from Wombramurra, the Creighton’s were chasing well-muscled bulls to go over Brahman/Angus females to breed terminal calves.