Simmentals rise to the occasion at livestock sales December

NARACOORTE – South Australia agents sold 5257 steer weaners to a top of $1435 and $1120 average, or 334c/kg December 10-11.
LAWRIE FAMILY’S ON A HIGH – Combined Naracoorte agents sold 3035 heifers for an average of $883 or 297c/kg. Many of the calves were sold a month earlier than usual due to the drought.
Elders Naracoorte branch manager Tom Dennis said the Lawrie family’s Simmental-Hereford topped the heifers in cents-a-kilogram rates, at 330c/kg. “There was a premium for Simmental-cross heifers to breed with and place on feed,” he said.

THE JAMES FAMILY’S STANDOUT – The top money was paid for steers sold by one of the largest vendors, WV James and Sons, Cooranga, Lucindale.
They sold their entire drop of 760 steers, all Angus and some with black Simmental-blood, EU-accredited, born March-April, for an average of $1193
The top dollars-a-head heifer was $1131 for Johnson Livestock’s nine Simmental-cross heifers, 385kg, to Thomas Foods International.
Some of the highest cents-a-kilogram steer sales included 13 EU-accredited, Simmental-cross calves, sold by Bloomfield, weighing 245kg.These fetched 355c/kg or $870.

JOHNSON FAMILY HAVE THOUSANDS OF REASONS TO SMILE – Brian Johnson and son Graham sold steers at ­record prices through their company LS Johnson, and the joint venture entity they run with another son, Ian Johnson, Johnson ­Livestock.
Johnson Livestock, Ross Plains and Conmurra, sold a total of 419 Simmental-Hereford and Angus-­Simmental steers, EU accredited, February-March drop, for an average of $1135
These steers sold to a top price of $1320 — 407kg sold at 324c/kg — for 26 ­Simmental-cross steers to Princess Royal feedlot. Their cattle weighed ­between 320kg to 351kg with an average of 333kg.
LS Johnson & Son, Springbank, sold 191 ­Simmental-Hereford-Angus steers, EU accredited, February-March drop, averaging $1106.
In heifer sales, Johnson Livestock sold 91 Simmental-Hereford and Angus and Angus-Simmental heifers, EU accredited, February-March drop, for an average of $918 or 308c/kg. These weaners fetched a top of $1131 — nine Simmental-crosses, 385kg, sold for 294c/kg to TFI.
In all these heifers weighed 273kg to 385kg, aver­aging 304kg. LS Johnson & Son sold 123 Simmental-Hereford-Angus heifers, for $885 or 303c/kg on average and 297kg. They topped at $1042, paid for nine Simmental-crosses, 335kg, which made 311c/kg. 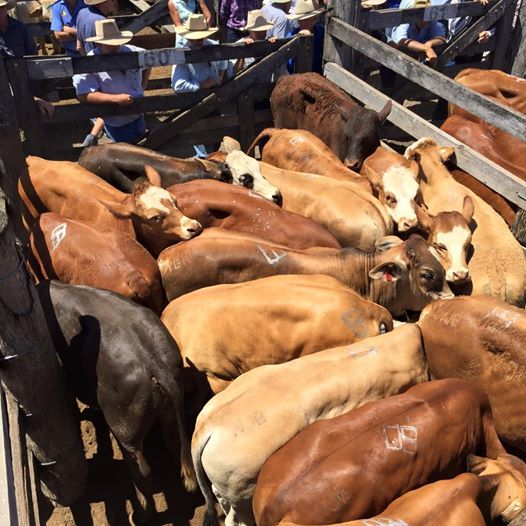