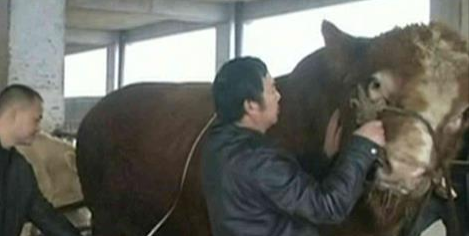 The biggest bull in the world weighing 1,887 kilograms

A bull that is believed to be the biggest in the world has been found in south west China’s Sichuan province.

Coming in at two times the weight of an average bull it’s a hefty 1,887 kilograms.

At four years old the animal is 2.6 meters long and it’s chest is three meters wide.

The simmental, a hybrid breed originating in Switzerland, is now in line for an award overtaking the current world record holder by 187 kilograms.