Mr Hopkins paid tribute to the support of his wife Nicole and the staff assisting with the sale, and to the commitment of cattle producers ito the Simmental breed.

Mr Crye also bought ten-month-old bulls Valley Creek Logan and Valley Creek Lucas for $10,000 and $6,000 respectively. Each bull was an ET son of Lancaster Poppy B376 by MR NLC Upgrade U8676. The other ten month sold for an outstanding $10,500.

Valley Creek Khloe, the principal of the 2014 drop heifers sold for $7,500 to Abington Station, Gundagai. The thick, long and soft heifer has a super front end

but does not give away any performance. VC Khloe will be sh

own at the Sydney Royal Easter Show 2016 before heading to her new home.

It, was also a very emotional day for Stuart and Sammy whom have worked very hard to expand their genetic pool to produce some outstanding animals.

“A sincere thank you to all buyers, under bidders and we are both thrilled and humbled by the support offered and the result achieved”, Samantha said. They also thanked John, Nicole, Mim & Judy Hopkins for a fantastic sale and a special mention to Nich Hreszczuk for all his help with the sale.

Landmark and GTSM conducted the sale, with Michael Glasser taking the bids. 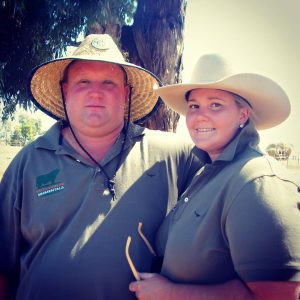