World Simmental Federation statistics put the number of Simmental cattle worldwide at over 40 million head, making them second only to Zebu in worldwide numbers.
Importation of semen into Australia commenced in April 1972 with both German and Swiss strains. In later years many Simmentals were imported through New Zealand and this, together with access to semen from North America, has expanded the gene pool to one of the largest in the world.

Since 1972, stud breeders have selected superior animals from Simmental’s enormous worldwide genetic pool and coupled these genetics with selection for adaptation to Australia’s wide range of environments and production systems. The Australian Simmental today has traditional, red, black and sim angus recorded in their register.

The Australian Simmental, is a breed with all-round superior performance when used either as a pure breed or in crossbreeding programs. The genetics are designed to breed a better bottom line for commercial producers. Whether you’re a northern tropical, or a temperate zone producer the advantages of Simmental hybrid vigour include;

The successful development of the Australian Simmental owes much to the skills of stud breeders in pursuing performance selection systems and selection for commercially important conformation and structural traits.

The Australian Simmental is characterised by:

EBV Data shows a dramatic improvement in calving ease, both direct and in daughters, combined with lower birth weights. 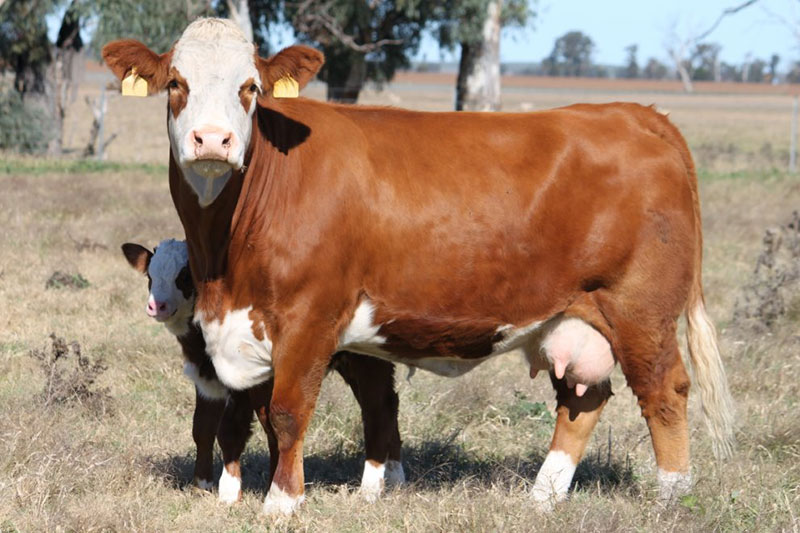 Milk and Mothering ability are important traits in replacement females. Simmental females excel in these traits, further boosting the weight of their weaner progeny.

Simmental cattle are extremely docile and easy to manage if handled well. Most important in cattle management, in finishing programs and reducing stress in slaughter cattle.

• All with excellent temperament