A major role for the Simmental breed is its use in crossbreeding programs.

Crossbred animals with at least 25% Simmental content are described as “Simbeef”. A distinctive yellow Simbeef ear tag is often used to identify these cattle in the marketplace.

Crossbreeding with Simmental produces significant productivity gains due to hybrid vigour and to the additive traits derived from the Simmental breed.

When combined, these gains generally boost overall productivity by 10% to 20% in the Simbeef F1 (first cross) animal and by 20% to 25% where the Simbeef F1 female is used as a breeder.

Simmentals may be used in either “Terminal” or “Rotational” crossbreeding programs.

This is the most common crossbreeding system, with “other breed” females mated to Simmental bulls and all Simbeef F1 progeny sold. This system is a popular means of boosting productivity of Hereford, Angus, Shorthorn, Brahman, Braford, Santa Gertrudis, and dairy breeds.

The resulting Simbeef F1 progeny grow 10% to 20% faster, and produce better muscled, leaner, higher yielding carcases. They are generally more efficient in utilising feed (eg in feedlots) and benefit from the docile temperament of the Simmental.

While straightbred progeny of most of these breeds need to be marketed when they reach target market weight and fat cover, or else risk becoming too fat and suffer lower prices per kg, Simbeef progeny enjoy more market flexibility. If market prices are temporarily low, they can be held over without becoming overfat.

An added feature of these Terminal crossbreeding programs, is that the heavier, leaner, better muscled Simbeef F1 heifer progeny often fetch similar prices per kg as do steers of these other breeds. They are also in strong demand as replacement breeding females. 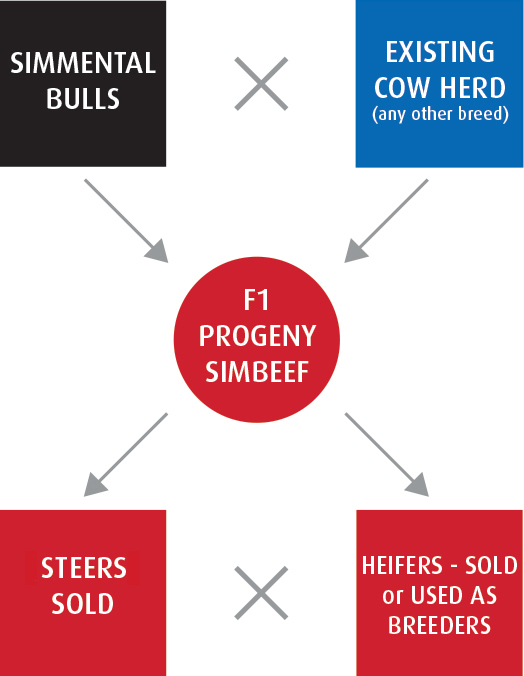 Rotational Crossbreeding programs are a natural progression from the use of a Simmental bull as a Terminal sire. They are designed to stabilise the Simmental content whilst maintaining a high level of hybrid vigour.
Typically, these programs increase productivity by 20% to 25% relative to the original straightbred herd. Simbeef progeny contain between 25% and 75% Simmental, providing a variation in maturity pattern and access to a range of target markets.

The programs capitalise on the superior maternal qualities of the Simmental, including Milk, mothering ability and high fertility traits.

A major benefit with these programs is that replacement females can be selected from within the program rather than purchasing them or retaining another straightbred herd to produce them.

Rotational crossbreeding systems are long term and can be tailored to meet the needs of the individual herd, environment and target market requirements. 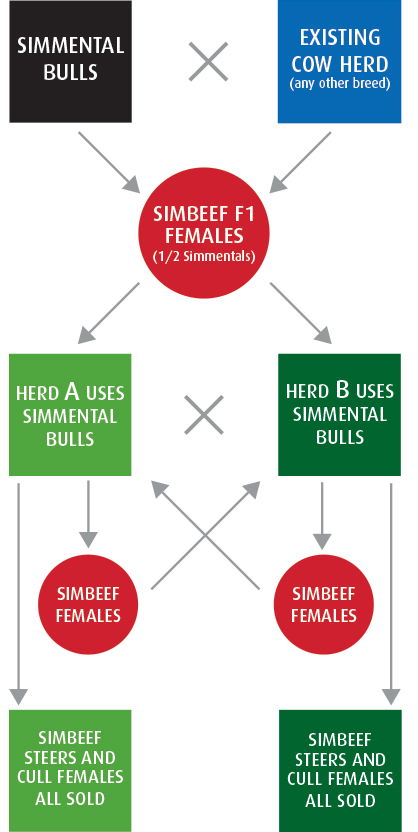