RECORDS were smashed at the first bull sale of the 2019 selling season, when Naracoopa Simmental stud topped the Landmark Great Southern Blue Ribbon All Breeds Bull Sale at $16,500 last week.

While values in the breeders sale preceding the bull sale took a hit thanks to seasonal conditions, this didn’t transpose to the bull sale which saw 50 bulls offered and 42 sold under the hammer to average $6048.

There was always going to be high hopes for the sale-topping bull from the Naracoopa stud, which is based at Denmark.

The Black Simmental bull, Naracoopa Neumann N15, had attracted significant stud and commercial interest from across the country and it was no surprise when the hammer dropped at $16,500 to set the new sale record.

Neumann is heading over east, when it was bought by the Woonallee Simmental stud, Millicent, South Australia.

This is where Neumann’s sire, Webb Tank WEBPK090 heralded from when it was bought by the Hards in 2016 for an Australian record price at the time of $27,000.

Woonallee stud principal Tom Baker was keen to buy back some of the Webb Tank genetics, that he said had been performing exceptionally within their stud.

“Neumann appealed to us as a genetic package,” Mr Baker said.

“The sire and dam of the bull was bought out of our sale a few years ago and the sire, Tank, has excelled in our program and we thought his son would be useful for an outcross program.

“The dam of Tank is as good a Black Simmental as you would find in the country, so there is plenty of maternal power in these genetics.

“We are running 600 Black Simmentals now and so we have a good base on which we can use these genetics. “It is also nice to give something back to studs such as Naracoopa that have supported us over the years.

“We have had good support from a number of studs in WA, so it is nice to return something to that State.”

Neumann, out of Woonallee Olivia K166, was a freemoving, very soft bull that showed plenty of stud sire presence and a great temperament as it paraded the sale ring.

It recorded +2 for milk and an eye muscle area EBV of +3.6. Neumann was a January 2017 drop calf and was homozygous poll.

The other Simmental stud to offer at the sale was the WA College of Agriculture, Denmark’s, Inlet Views stud, which had four bulls on offer. Two of these sold under the hammer both at $3500. 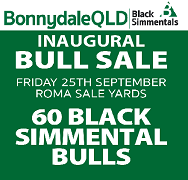 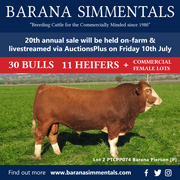